About Us / Company Overview / History

In the 1890s, before Oklahoma was a state, entrepreneurs were investigating an emerging technology – electrification. Oklahoma Gas and Electric Company was the first in the state to implement this sought-after technology and, by 1928, was Oklahoma’s largest electric company.

Since those early days, OG&E has seen a lot of “firsts.” We’re proud to be an energy company with a rich history and a legacy of reliable service, affordable rates, customer satisfaction and support for our communities and the environment. We’ll carry the spirit of innovation that started more than 100 years ago as we grow together with our customers in the future. 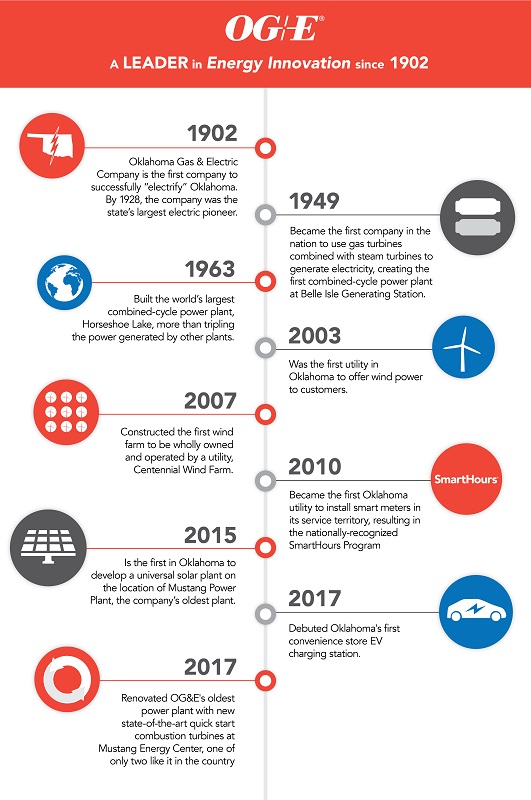 1902 – Oklahoma Gas & Electric Company is the first company to successfully “electrify” Oklahoma. By 1928, the company is the state’s largest electric pioneer.

1949 – OG&E becomes the first company in the nation to use gas turbines combined with steam turbines to generate electricity, creating the first combined-cycle power plant at Belle Isle Generating Station. Today, combined cycle power plants are recognized among the world’s safest fossil-fired plants for the environment and the climate. These plants produce high power outputs with high efficiencies and low emissions.

1972 – 1975 – The nation’s energy crisis means a shortage and ever-increasing costs of the natural gas used to operate OG&E’s plants. The company turns to low-sulfur coal from Wyoming as a means for keeping customer rates low and assuring a consistent power supply. The company begins construction of coal generating units at the Muskogee Power Plant in 1972 and builds the Sooner Power Plant in 1975. By 1980, almost half of OG&E’s power output is from coal-fired generation. Today, the company is converting its Muskogee plant to natural gas and adding scrubbers to its Sooner plant in order to preserve fuel diversity and reduce cost risk for customers while still complying with EPA mandates.

Mid-1990s—OG&E works with the University of Oklahoma and Electrosource, a company that makes lead acid batteries, to promote electric vehicles. OG&E later sponsors research with OU to produce a two-hundred-mile-per-hour electric race car. Today, OG&E’s fleet includes more than 10 electric vehicles, and the company has plans to expand its use of EVs in its truck fleet.

1995 – Oklahoma City is changed forever on April 19 by the bombing of the Alfred P. Murrah Federal Building. OG&E crews are among the first responders during this horrific event, working to secure and disconnect live electric wires, using truck ladders to reach those stranded in the building, stringing temporary emergency service lines to provide power to searchlights for rescue operations and powering pumps to remove water from the devastated building’s basement.

2003 – OG&E is the first Oklahoma utility to offer wind power to customers at the Oklahoma State Fair customer kick-off event.

2007 – OG&E constructs the first wind farm to be wholly owned and operated by a utility, Centennial Wind Farm. Today, the company owns two additional wind farms—OU Spirit and Crossroads—and has Power Purchase agreements with four others, making our wind generation close to 842 MW of power

2010 – OG&E becomes the first Oklahoma utility to install smart meters in its service territory, resulting in the nationally-recognized SmartHours program. More than 120,000 participate in the program today. These customers have saved an average of $150 during the summer months.

2015 – OG&E is the first in Oklahoma to develop a utility-scale solar farm on the location of Mustang Power Plant, the company’s oldest plant.

2017 – OG&E ushers in a new era in energy technology with the opening of its Mustang Energy Center, with quick-start combustion turbines capable of starting and putting electricity onto the system in under 10 minutes.

As the industry evolves, we’ll continue to apply new technologies as we partner with customers to provide reliable service at the lowest reasonable cost in an environmentally responsible manner.